Hello and welcome to my blog on Dungeons & Dragons, old school gaming and becoming a Killer DM!

I’ll kick off my blog with some thoughts on the relationship between a game’s mortality rate and its method of character generation. Here’s a diagram of my trinity of old school gaming: 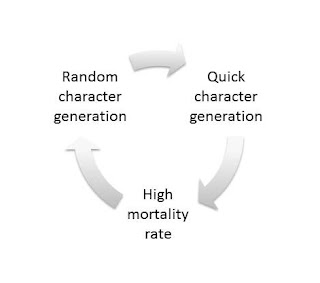 For starters, random character generation is one of the best ways to quickly make characters, at least if you want some depth and variety. The moment you start using building points, for instance, you will usually sacrifice complexity (i.e. offer few options) or speed (i.e. make players spend a lot of time weighing and choosing options).

(A counter example is James V. West’s excellent game The Pool. Character creation is quick but offers surprising depth and has long legs. But then, The Pool is a very different type of RPG than D&D.)

Quick character generation then allows us to kill off characters with abandon. If character creation takes hours, a player who has lost his character may end up sitting out the rest of the session. Even if he doesn’t (because the sessions ends or the player gets to control an NPC etc.) that’s an awful lot of time down the drain. Al from Beyond the Black Gate touches upon this topic in his post Character death = Fun!

(Just imagine telling a Magic: the Gathering player that he has to scrap his meticulously assembled new deck if he loses a single match with it (i.e. ‘dies’).)

I also believe that a high mortality rate is a prerequisite for random character creation. Else, the latter is simply unfair. When you roll up characters for a game expected to take characters from 1st to 20th level without anyone ever (permanently) dying, bad luck during character generation might doom a player to playing a weak character for years. To me, that’s unacceptable.

Contrast this to, say, a deadly OD&D campaign: Rolling up a character with excellent stats is no guarantee he’ll make to 2nd level or beyond. Player skill (and yet more luck) will be the deciding factor. And once a character has run the gauntlet, he will have grown on you and weak stats might actually be endearing. James Maliszewski has more to say on this in his excellent post character death in old school gaming over at Grognardia.

More on the various implications of my trinity next week!
Posted by Johann at 8:32 AM