After explaining the relationship between a game’s mortality rate and its method of character creation, how the former leads to simple and exciting combat, and why all of this makes it easy to form or find a gaming group, I finally get to analyze how it all relates to challenging and creative roleplay. 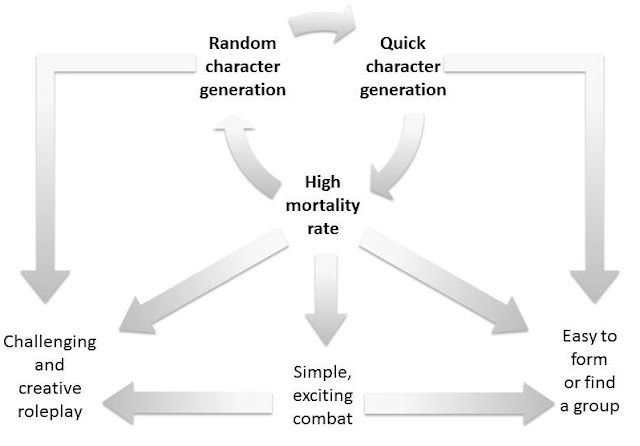 Random character generation results in quirky characters (an intelligent warrior, a nimble wizard etc.) and, perhaps more importantly, in characters one might not have chosen to play otherwise.

A high mortality rate leads to a much, much more intense roleplaying experience. Consider the following scenario:

Peasants ask the adventurers to help them against a terrible monster. It’s a sandbox campaign, so the monster might indeed outmatch the characters and it’s up to the players to decide whether to tackle it or not.

If the players know that the DM will let them escape in case things go wrong, or will adapt the monster to the party’s strength, or fudge, then the choice to play the heroes is an easy one.

(And that’s exactly what the players will do: play the heroes.)

If the players know - from actual experience - that PC death is a very real possibility and a TPK is not out of the question, then the choice to play the heroes is a tough one.

(And if the players go through with it, they are the heroes, at least to the extent it’s possible to vicariously experience such a thing through fiction.)

In the former case, you’re emulating a genre and creating a story (with high drama and heroic deeds).

In the latter case, you’re putting yourself in a character's shoes to make challenging choices and suffer the consequences, for good or ill.

Of course, similarly negative consequences for the players also work to some extent. If the risk is real, the play is intense. Choosing to enter a tomb when you know it’s full of level-draining wights takes guts on the part of the player. Choosing to save an NPC’s life instead of escaping with gold worth 3000 XP requires that the player is really invested in the in-game fiction or his vision of the character.

(Risking a -1 penalty for the next three encounters or getting those 3000 XP or whatever from the ‘story award’ for saving the NPC – well, that’s just not the same.)

Oh, and then there’s simple combat. A simple combat system frees up mental space for creative solutions or evocative descriptions. In complicated games, players are so busy tracking multiple variables and weighing (preconfigured) options that there is hardly any time to appreciate the fiction or think outside the box. It was a running gag in one of my Rolemaster campaigns that, after a long fight, the players and DM would enumerate all the mechanical advantages and bonuses they had forgotten about.

That's it for now with My Trinity of Old School Gaming. Next, I'll start a series on Becoming a Killer DM, but I plan to throw in some rants and reviews as well.
Posted by Johann at 11:20 PM